BEYOND THE FABRIC OF REALITY

RISE OF THE FALLEN 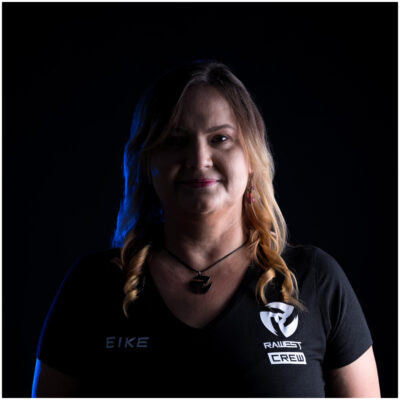 It’s a good idea to introduce you to the constantly cheerful, sociable and young soul – Eike
She is not afraid of the dance floor where she will dance and flirt with quite a few guys.

Her first exposure to electronic dance music was so long ago, though, that even she can’t tell now when exactly it happened.
Nevertheless, she can tell you that Prophet and Lady Dana were the two who gave her that impetus.

But when she first visited Operation Raw, she knew immediately that this was the place she wanted to contribute.
This is the team she wants to be part of and do something big together.

Now in charge of artist accommodation, merchandising and intra-team events, Eike has also developed the „Rawest mommy“ status…
Maybe it’s because in the middle of this herd of boys, it’s often her who calms down these savages.
It’s like a balance in this male dominance.

For her, Rawest is more than just a team.
„It’s a family and just like every family has both white and black sheep.“

„But it is blood that speaks,“ she adds. 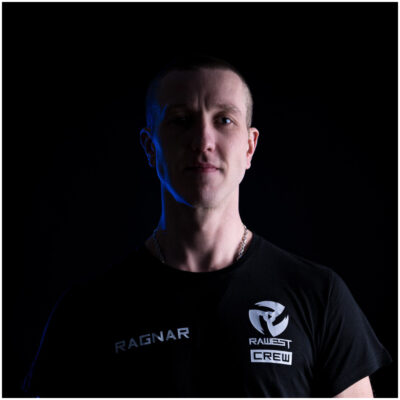 As for Ragnar, it is safe to say that this is a person who has truly and significantly developed.

This rather stubborn and insecure lad, for whom Rawest was only a party organiser in his early years, has now grown into a confident and innovative man who sees something more in this team and community – the perfect place for development.
That’s from the perspective of himself and the community.

Having joined the team in 2014, Ragnar now has a clear target in sight and, with his steadfast and determined nature, he is starting to emerge from his insecurities and armour.

For a citizen who has in his head more (important as well as less important ideas and thoughts) than he utters and agrees to share with others, this is a man who does not waste words and does not sit idly by.
So does Ragnar, who expresses himself more by creating and building something… and it’s often round-the-clock.

Hardstyle became attached to him in the early years of the 21st century, when his older brother introduced him to this rich and eye-popping world.
Having been committed now to Drum & Bass skin, Ragnar knows how to finally reach the hearts of this music aficionado, too.

“Quiet and wise,” as they say. 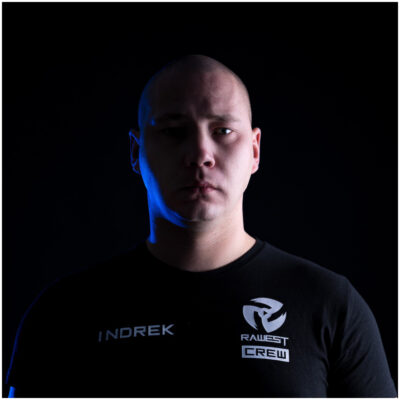 Let us introduce the Raw Power of Rawest – Indrek.

There are an awful lot of proverbs around this gentleman, such as “Do not trouble trouble until trouble troubles you” and “A friend in need is a friend indeed.”
This is a man who does not make empty promises and who also knows the importance of agreements and sticking to them.
Being specific and forthright, he does not (generally) renounce his words.

But don’t let that serious look fool you – there is actually an extremely mellow bloke and a true team player worth going scouting with.

He became familiar with Rawest activity in 2014 while visiting legendary events known in the times of Poseidon, but he joined the team two years later, now in charge of the Support team.
With the ability to express his thoughts and ideas clearly and at the same time to stick to his principles, his diligence and enthusiasm will make many eyes open.

Indrek has got such qualities that are necessary for a person who is also responsible for stage and lighting.

However, when negotiating with him, you should exercise a great deal of patience to make negotiations smoother.

On the question “What does Rawest mean to you?“ Indrek doesn’t say much, but will add that it’s part of his daily life, enjoying it to the fullest. 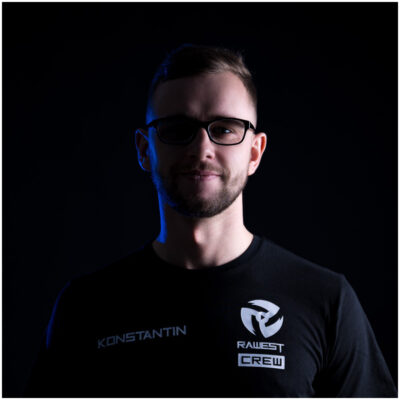 Allow us to introduce a determined pawn – Konstantin.

Kostja’s first contact with hardstyle took place back in 2005, and for now, the spectrum of this citizen’s musical preference ranges from early hardstyle to terrorcore.

He got his first rawest party experience in 2015 when he visited Operation Raw, but after Algorythm 2016, his heart belongs to Rawest.
Fascinated by the powerful atmosphere, which was created by Rawest team that night, he saw himself in action with this team, and it wasn’t long before Kostya joined Rawest team.
A boy who didn’t even dare to hold a roll of paint at first has grown into an ambitious and consistent young man who is now in charge of various creative projects.

Having a great talent for art and a sense of humour, he is a decent wind-up at times, but we could still bear in mind that he is a creative Wolf who wants to deal with everything.
Let it mention here that if something needs to be done, Kostja can work incessantly for it.

On top of that Rawest means family to Kostja, he feels that it is also a source of energy for him to forge a path in the journey of self-development. 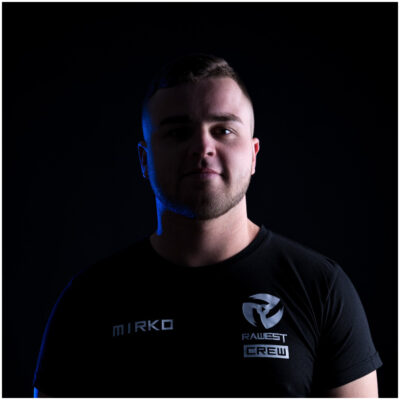 We present you a stubborn bear who does not hibernate – Mirko Karu (Karu is ‘Bear’ in Estonian).

Given his hard work and entrepreneurial spirit, we cannot talk about any kind of sleep here, because dreams and goals need to be realized.
At times, his dreams may seem extremely ambitious and even quite fantastical, but we should also mention here that the word ‘fantastica’ has accompanied this citizen for a lifetime.
The more unattainable and unreal the dream seems, the more he wants to reach it, because, as they say, “It is not the destination that matters, but the journey to the goal!” and the journey is what feeds Mirko’s soul.

Mirko may have the soul of a bear, but in the end the heart of this man indulges. So happened at Defqon.1 festival in 2012, where he gave his heart to hardstyle in tears of happiness in front of the main stage.
Caught up in his sense of mission, he had a certain purpose in sight, and by the end of 2014 he was already part of the Rawest team.

A man dedicated to the most important details in the design of events and whose vocabulary lacks the phrase “Impossible”, he knows what an uplifting and powerful result could look like.

“It’s especially positive for me to see how Rawest has inspired others in this skin with his actions and enliven the dance music event culture here”, Mirko says in closing. 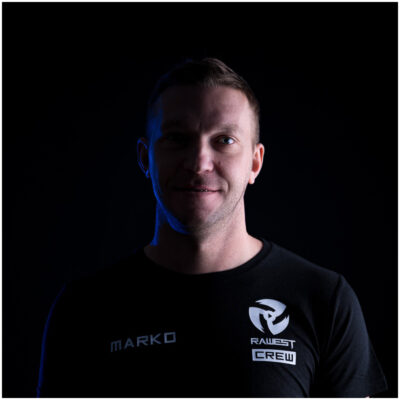 Let the glory shine over Marko – perhaps, the most sober mind of Rawest.

This is a man who is not deterred by any storm or earthquake, and who can remain calm in the tensest situations ever. Marko startles with his radiant positivity and stoic calm, setting an example for many.

While the early hardcore was fondling Marko’s ears earlier this century, he was specifically exposed to hardstyle in 2009 and after the visit of Defqon.1 in 2013, it „went like clockwork“.
“Defqon.1 has been one of the best experiences I’ve had in my life,” Marko says, shedding light on the life-changing event.

Marko began his career at Rawest in 2015 after the legendary Operation Raw, carrying televisions at the club. Marko is now in charge of hosting foreign artists and finance department of Rawest.
In keeping his responsibilities in check, Marko is a progressive, high-minded, development-driven Tiger. One of his highest goals is to inspire others, because by sharing his experiences Marko injects self-belief and motivation into many.

Luckily, with his fast-paced lifestyle, Marko also finds time to jump through the dance floor to enjoy the result with his fellow contestants and perform a few faster dance moves.

To the question: “What does Rawest mean to you?”, Marko responds heroically: “Standing to my last drop of blood.” It’s an honour to present one of co-founders of Rawest – Rasko.

This may sound a little surprising, but Rasko only got to know hardstyle in 2009, although after visiting Winterjam in 2010, Rasko’s heart started to burn with a very bright flame against hardstyle and over the next few years he visited countless legendary events in the Netherlands that he never dreamed of.

When he started this project, later called ‘Rawest’, with his good friends Aigar and Dimaz in May 2014, he had no idea that it could grow into something bigger, but in symbiosis with the past experience and wide-eyed experience of foreign events, he finally prepared a vision to make something real in the landscape of Estonian club events.

Rasko stands with the team to ensure that core values of Rawest are preserved when making different decisions.
Rasko is also involved in the preparation of event line-ups, social media and marketing.
As well as being responsible for Rawest overall image, Rasko also applies the personalised saying: “Measure twice, cut once,” because he is an authentic analyst or a true analysis boss.

“Rawest is a mystical phenomenon that grows against any logical explanation. I’ve realized how powerfully music draws and unites people, and what it can do for a common purpose,” Rasko sums up his story eloquently.

rasko@rawest.ee
+372 5855 8881
rasko9
rasko9
We use cookies to ensure that you get the best experience on our website. Using our website means that you agree with the use of cookies.
I agree Find out more here